Since the beginning of the COVID-19 pandemic, the internet has experienced a massive resurgence of interest in Non-Fungible Tokens and Blockchain technology. You have probably seen the first mainstream use cases of this technology by now, most famously represented by cartoonish profile-picture collections of apes, lions, cats, and in the case of CryptoPunks, pixelated human faces. While the artistic validity of these collections is hotly debated by different communities across the internet, this can be considered early adoption of NFT technology that is far from what it has the capability to be. Playlist Push is keeping a close eye on the role of NFTs in the music industry...here’s why you should too.

What are NFTs exactly?

Non-Fungible Tokens can be thought of as digital signatures that can verify an individual digital work as the “original copy.” This idea has been regarded as invaluable by some while laughed off with right-click + save jokes by others. Whether or not you feel that Beeple’s ‘Everydays - The First 5000 Days’ is really worth $69 million, the reality is that the concept of the “original digital copy” is putting serious money into the pockets of creatives, from the Adam Bomb Squad NFT collection by legendary streetwear brand The Hundreds, to the NBA’s officially licensed Top Shot NFT Collectibles, to EDM DJ/Producer 3lau’s collection of album NFTs sold for a total of nearly $12 million. Creators can also receive royalties as percentages of secondhand sales made after the initial sale, in perpetuity so long as they continue to own the rights.

How Are They Being Used in the Music Business?

NFTs are being incorporated into the music business alongside other blockchain-based innovations such as social currency tokens and smart contracts. These new tools are being eyed for their offerings of transparency and freedom, which are qualities the music industry is notorious for lacking throughout its history. One good example of these tools being put to use in conjunction with each other can be seen on the Rally.io creator page of house music DJ/Producer Wax Motif.

Back in April, Wax Motif announced the launch of his own social token known as $WAXM. Holders of this token would be able to enjoy special privileges such as exclusive access to certain Discord server channels, one-on-one Ableton studio sessions and more. Now on his Rally.io page, we can see how NFTs, social tokens and the blockchain play out in the real world. By scrolling through his “Active Campaigns” list, we can see how much each benefit offering costs in $WAXM, its equivalent price in USD, and the total amount the artist has made off of each type of campaign.

The artist currently has three different limited-edition NFT creations, two of which could only be acquired by scanning a QR code at a specific live event. The last of his three NFT creations is only awarded to the “OG $WAXM holders” which shows how NFTs and social tokens can be integrated into each other while engaging with an artist’s community both in-person and digitally. Effectively, Wax Motif has established new sources of revenue that exist within his own economy.

Who Else is Getting Involved in the Music Industry?

The NFT/Blockchain boom has been so pervasive that even Universal has its Web3 label 10:22pm launching metaverse group KINGSHIP - a 4-piece digital band of one Mutant Ape and three Bored Apes from the famous Bored Ape Yacht Club. Emerging platforms such as Audius and 3lau’s Royal are centered on the concept of transparency and freedom that the blockchain has to offer, letting artists take control of their price points and creative offerings without involving labels and distributors as middlemen that take a large chunk of the pie. It seems as though there is a new platform or marketplace every week targeting the music industry but only time will tell who has the capabilities to shift the industry.

How Will Blockchain Technology Shift the Music Industry?

The industry has always been slow to adapt to new technologies and we expect that there will be many innovators attempting to get ahead of the curve but few who will survive it. For artists, NFTs and the blockchain can provide not only the mentioned benefits but entirely new ways of engaging with fans, marketing and monetizing. It’s possible that blockchain technology can be the antidote to many of the industry’s metadata and administrative issues. On the other hand, the potential freedoms can make the industry even more disjointed if each organization and artist conducts transactions and governance within the rules of their own economies. Either way, the future is here. 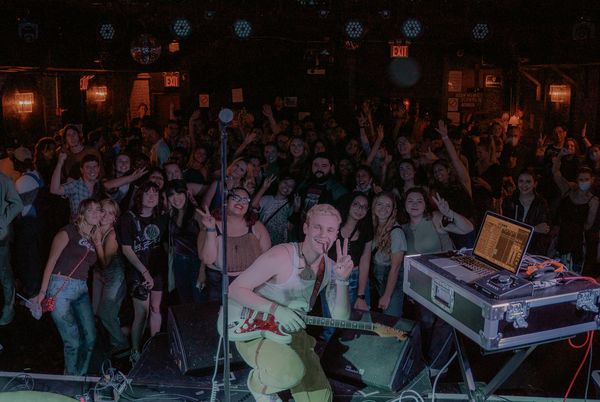